Latest News
Home /Why Are There Currently No Ads On Techdirt? Apparently Google Thinks Were Dangerous

You probably didn’t notice it, but there are currently no third-party ads on Techdirt. We pulled them down late last week, after it became impossible to keep them on the site, thanks to some content moderation choices by Google. In some ways, this is yet another example of the impossibility of content moderation at scale. If we didn’t know and understand how impossible content moderation at scale is to do well, we might be like The Federalist and pretend that Google’s content moderation decisions were based on disagreement with our ideology. That would have allowed us to make a fake story like the one that is still getting news cycles, thanks to idiots in Congress insisting that Google defunded the Federalist because of its ideological viewpoints.

The truth is that Google’s AdSense (its third-party ad platform) content moderation just sucks. In those earlier posts about The Federalist’s situation, we mentioned that tons of websites deal with those “policy violation” notices from Google all the time. Two weeks ago, it went into overdrive for us: we started receiving policy violation notices at least once a day, and frequently multiple times per day. Every time, the message was the same, telling us we had violated their policies (they don’t say which ones) and we had to log in to our “AdSense Policy Center” to find out what the problem was. Every day for the ensuing week and a half (until we pulled the ads down), we would get more of these notices, and every time we’d log in to the Policy Center, we’d get an ever rotating list of “violations.” But there was never much info to explain what the violation was. Sometimes it was “URL not found” (which seems to say more about AdSense’s shit crawler than us). Sometimes it was “dangerous and derogatory content.” Sometimes it was “shocking content.”

But that would be about it. One difference, however, was that in the past Google would say that we didn’t need to fix those flagged URLs and that they would just stop showing ads on those pages. Which is fine. They don’t want their ads appearing there, no problem. But, many of these new “policy violations” said they were “must fix” issues. But what that “fix” sould be was never explained. Incredibly, this included a non-existent URL (a malformed URL that would just take you to the front page of Techdirt). That was deemed “must fix.” Also, somewhat amusingly, the tag page for Google was deemed “dangerous or derogatory” and “must fix”:

Same with the tag page for “content moderation.” I only wish I were joking:

Again, what you see there was basically all of the information given to us. How do we “fix” that? Who the fuck knows? Again, I do not think that this is Google targeting us for our views (even when we have been critical of Google or Google’s content moderation practices). It just seems to be that content moderation is impossible to do well, and Google is a prime example.

Incredibly, this list of problematic URLs would just keep changing. Some would drop off the list with no explanation (even the “must fix” ones). Some new ones would be added. Some would switch between “must fix” and “don’t need to fix.” No explanation. No record of the “fixes.” As an example, on Friday July 31st, I logged in and saw 25 URLs deemed to be policy violations. On Saturday morning I logged in and it was down to 18. No reason. Sunday morning it was at 22. But Sunday evening it was 27.

I tried to reach out to people at AdSense to figure out what the hell we should do and did not get back anything useful.

Three other things happened around this time as well. First, on the same day we started receiving these daily (or multiple times daily) policy violation emails, Google also started claiming that our daily emails (which are just snapshots of the blog itself) were phishing attempts, and automatically deleting them from any G Suite user’s email account: 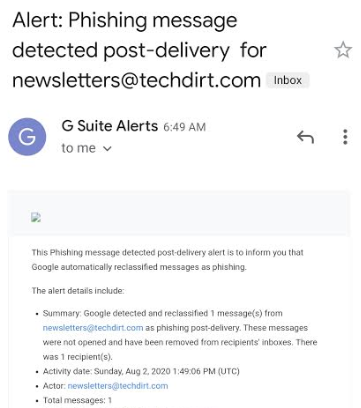 For users of Gmail (not G Suite) it just moved our newsletters to spam, still claiming they were phishing attempts:

Again, the emails don’t ask users to do anything or to log in to anything. They’re not phishing. They’re just an email version of the day’s blog posts. We didn’t see how these two things (the AdSense violations and the accusations of “phishing”) could possibly be connected, so it might just be a coincidence that they started the exact same day — but, again, who knows?

The next thing that happened was that the company we work with to manage the ad flow on our website (and to bring in other sources, beyond Google ads) told us that Google had reached out to them (not us) to say that because of all of the ongoing unfixed “policy” violations, we would be kicked out of AdSense by the end of August. Also, Google told them that we were engaging in “clickspam” by hiding our ads to make them look like regular content, and that needed to be fixed immediately. The problem is — we don’t do that and have never done that. Our ads were always in the right hand column and clearly called out as ads. Indeed, we pay attention to what other sites do, and we are way, way, way, way more careful than basically every other website on the planet when it comes to not shoving our ads where they might be mistaken as organic content.

Finally, we started receiving reports from multiple Techdirt visitors (including those who told us they had purposefully whitelisted Techdirt from their ad blockers) that ads being delivered by Google were causing their computers to run hot. Multiple reports of ads on Techdirt failing to load properly, and causing Techdirt to fail to load properly. And also causing fans to turn on. And, to be honest, that’s the last straw for us. We would try to work with Google to understand why our content is so problematic for it, but when Google’s products start harming our users and causing a nuisance for them, that’s when they’ve got to go.

Given all this, we just decided that we’re pulling the ads off the site entirely for the time being — at least until we can figure out a better situation. This (obviously) represents a revenue hit for us, but the situation had become impossible to deal with. I was wasting so much time the past few weeks trying to figure out what the hell we were supposed to do, as opposed to doing the work I needed to be doing. So, that’s it for now. We’re looking at other providers out there, but so far, so many of the ones we talk to appear to be sketchy, and we’re not doing that either. If anyone knows of any non-sketchy, non-awful advertising partners, please let us know. Or, if you happen to have some excess money and want to just sponsor stuff so we don’t even have to worry about regular ads, let us know. Assuming most of you are not in that position, we do have a page of various ways individuals can support us. We know that times are tough for many, many people right now, but if you happen to be doing okay, and can help us replace at least a little of what money we made from ads, that would be greatly appreciated.

Getting rid of the Google…

Reinventing virtualization with the AWS…

Lua in the Kernel?

On being compelled to create